To many people, the tonsils are second only to the vestigial appendix as one of the most mysterious parts of the body. When you ask the average person about their tonsils, the most popular response is that they were removed. Tonsils, on the other hand, aren’t just there to be removed; they have a meaning. Although a tonsillectomy could be the solution to your or your child’s breathing problems, knowing what your tonsils do is crucial before undergoing surgery.

So in this article, Dr. Pradeep Vundavalli who is working with one of the best ENT hospital in Visakhapatnam will discuss the role of tonsils & why you might have to remove them.

What They’re Meant To Do

“The palatine tonsils are two tiny organs in the back of your throat. Although the tonsils are often associated with the digestive and respiratory systems of the human body, they are actually part of the immune system. Since pathogens more often enter through the mouth, the tonsils stay nearby to serve as the immune system’s first line of defense against invaders.”- Says Dr. Pradeep. He also added that tonsil cells record the existence of a threat, such as a virus or bacteria, and report the threat to the rest of the immune system, allowing the body to respond and keep you safe.

What They Often End Up Doing

Tonsils are among the most hardworking components of the immune system. Indeed, that is the issue: they often work too hard for their own good. Tonsils are exposed to a large number of viral attacks as a result of their front-line position in the immune system, and they are often overwhelmed by these attacks. Tonsillitis, or inflammation of the tonsils, is a painful disease that makes swallowing and breathing difficult. Tonsils may also become too large for the throat they are in, obstructing the airway. This can lead to sleep apnea, a condition in which a person stops breathing for up to ten seconds while sleeping, reducing the supply of oxygen to the brain and leaving sufferers tired during the day.

To Remove or Not To Remove? 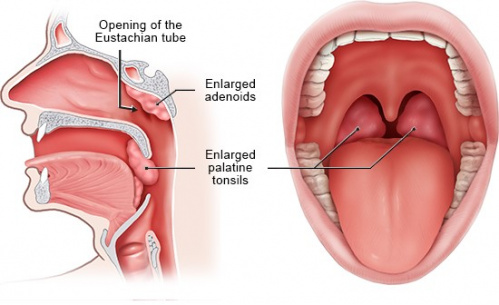 Early infections and sleep problems usually mean it’s time for a child’s tonsils to be removed. The adenoid (an organ connected to the palatine tonsils) is also removed in certain children with serious breathing difficulties. If infections are widespread or a sleep study indicates problems, a tonsillectomy is undoubtedly the best option, possibly in combination with adenoid removal if appropriate. If you or your child does not get at least five tonsil infections a year, or if sleep apnea is not a problem, surgery might not be required.

The following are some of the reasons why an adult’s tonsils will need to be removed:

To comprehend tonsillitis, you must first comprehend what the tonsils do. Tonsils that are in good shape help the immune system by intercepting and responding to pathogens that you inhale, triggering a fast reaction to infectious agents. Tonsils, like all conflicts, suffer casualties as a result of a wide range of pathogens. The tonsils can become contaminated as a result of catching bacteria that would otherwise kill you. The inflammation of the tonsils that results causes discomfort, bad breath, and can even obstruct the airway. It doesn’t take many cases of tonsillitis for doctors and parents to decide to remove a child’s tonsils, but ten cases of tonsillitis in two years or seven cases in one year is a reasonable rule of thumb for adult tonsillectomy.

Sleep apnea, or the cessation of breathing while sleeping, is the second most common cause for tonsil removal in infants. This is typically caused by tonsils that are too wide for the mouth, obstructing the airway. Since certain children do not have these excessively large tonsils, doctors should decide to keep them in place. However, sleep apnea, like allergies that cause tonsil inflammation, can strike at any age. If other allergy treatments fail to relieve adult-onset sleep apnea caused by swollen tonsils, your doctor can prescribe a tonsillectomy to open the airway.

Tonsil cancer is uncommon due to the large number of juvenile tonsillectomies that eliminate the risk, but benign or even malignant growths in the tonsils can occur in people who keep their tonsils. The human papillomavirus, or HPV, has been linked to tonsil cancer. A tonsillectomy is required in this case to prevent the spread of cancerous tissue in the throat and surrounding areas. Despite being a rare occurrence, it is the most common cause for an adult’s tonsils to be removed.